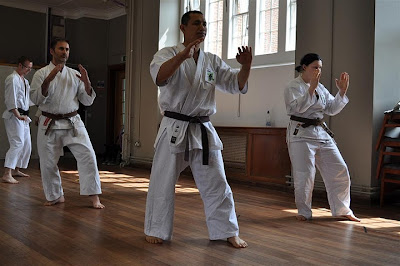 After a week or so I can now take stock of the grading and think about what went well and what didn't and how the preparation helped...or not?

My main concern leading up to the day wasmemory recall of the techniques. I've grained long enough to know them to a fair standard (some better than others, granted) so this didn't trouble me so much. I did however *still* get muddled up with the Japanese names and find that there is lag between being asked for a technique and my brain processing it and outputting it as action. So what to do? Well as MattKlein commented, just swot up on techniques and have someone call waza at random. Over and over again. And over some more. This worked quite well and in the grading I was confident that I could manage.

The second issue was not knowing who I would gradewith. As shorinji kempo is based on pair work this can have an effect on performance. Naturally techniques should be able to applied to anyone but in a grading it comforts you to know who your partner is. As it happens when I met mine and we had a chance to go through embu I felt a lot easier. He knew his stuff and was fluid in movement. No problem.

In fact during feedback Mizuno sensei made this very point about grazings. To him a grading is useful as it pressure tests technique. Yes they make allowances for the fact that sometimes we don't have a chance to practice with a partner beforehand but in real self defence you have to make the technique work. And this is grading: making it work under pressure. It's no good asking an adversary on the street to stop and start again "cos I wasn't prepared". 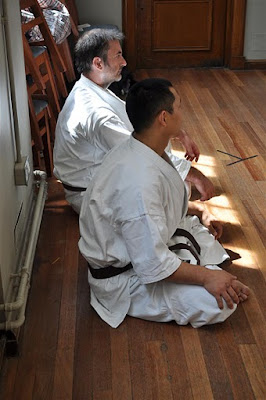 Lastly it's worth mentioning sweat. I know it's notpleasant but on a hot spring day in a packed dojo it becomes an issue when you're trying to apply wrist locks. The answer? Think creatively. Go with the flow of the technique and focus on the outcome (immobilising an opponent, trapping an opponent or maybe throwing). It was trickier but a valuable lesson. 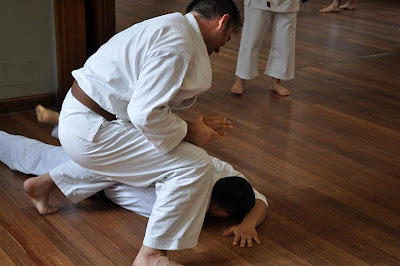 I'm so envious that your grading is over! Well done.

I'm also worried that I'll forget some of my techniques on the day. We've been advised that if we forget one of our ippons to just make it up rather than stand there looking puzzled. As long as it has the main components of block, counter and finish and is executed well the judges won't realise it wasn't the intended technique. I suppose it's all about thinking on your feet. Like you say - think creatively and focus on the outcome.

Some master once said that if you've got a good grasp on the principles of body mechanics and exude an aura of confidence during testing then a certain amount of forgetfulness is perfectly acceptable.

Congratulations on finishing the testing. I hope that someone managed to take a lot of photographs.

Really glad to see the random callout worked for you. Gradings are always unreal stressful, but it looks as though you handled it well.

Don't worry Sue-it seems like you have the right attitude and as Charleyhorse said in a previous comment- somebody would've had a word with you if they thought you weren't ready. I think you said "Enjoy the pain!" after that Charleyhorse?!

That's right Littlefair. Senior practitioners keep an eye out for brown belts testing before they are ready, and will say something if it's necessary. As for the pain . . . well, it just means that you tried as hard as you could, and so it's a badge of honor. That's a good way to look at it, I guess.

I'm sure a certain amount of karate brain farts (love that expression! LOL) are expected during Shodan gradings... I also think it's how you deal with it that counts. With any amount of practice there's going to be a time when your body puts you in a place you weren't expecting to end up. I think it's all about adapting and apply what you know to get you out of the corner, so to speak.

Thanks for the wishes Marie!