The fencing course culminates with a competition with the rest of the club. This includes fun atmosphere and prize giving so I was fairly relaxed about going along, despite not having actually fought anyone for real! 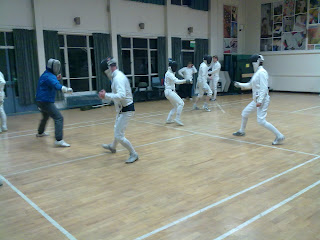 It was quite a liberating experience for me as when I have been to martial art competitions I'm always a little anxious about technique, remembering stuff, wanting to do well and not let myself down. These all buzz around my head so calming them is a process which takes up energy. Last night at the fencing tournament however I didn't mind at all! Everyone sees you are a learner due to the blue plastron beginners wear and I had nothing to prove. I went along to see how sword combat would be and to maybe get a few points on other fencers, which I did. 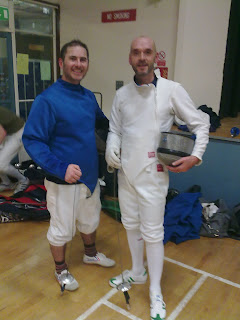 One thing to remark was how tired I was after each bout. I'm sure this was because I didn't really know about the correct and most efficient way to fence, but also maybe because I was lunging too much. I think more astute and experienced fencers don't need to lunge and this takes up a lot of energy. Also I was probably chasing the hit a little too much- I couldn't rely on sitting back, parrying and riposting as my technique wasn't developed enough.
My fights ended against M, a tall left-handed fencer who was very able and who thrashed me soundly with me scoring only one point on him. Afterwards in the pub he told me he'd been working on his footwork a lot which improved his fencing. He found that this could free up his mind to work on the 'point' work and bringing these two together, he said, really improved his game: foot and point working in unison. I couldn't help chipping in to add that ki ken tai (breath/spirit or shout, sword and body) was a similar concept in kendo and other striking arts. Bringing together the spirit of the attack (the raw will of the attack) with the body movement and footwork together with the strike of the weapon (be it sword or fist) gives a unity and firmness to the offence. Ki is sometimes considered as the shout or kiai and in some martial arts if the kiai is not present the point is not scored.
This concept is important on a physical level as it improves the structure of the given attack but also on a philosophical level makes the strike more complete. Movement within a traditional martial art is considered more correct if these three elements are present. This is particularly pertinent within kata or hyung practice when intent, focus and body movement are essential.
Posted by Littlefair at 03:46

Sounds like a fun course. I suspect good footwork is key to any type of competition sparring. Bad footwork definitely detracts from my sparring ability as I'm often wrong footing myself and losing scoring opportunities! We have to kiai to score points. Doesn't matter how great the punch or kick - no kiai, no point!

Maybe we should get tattoos....