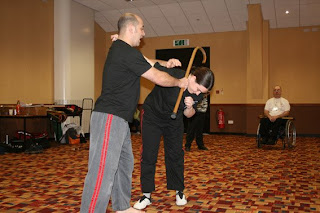 Poor old fella there with his walking cane. Probably couldn't handle himself if anyone attacked him huh? Well canemasters aims to prove otherwise: a self defence system worked around the walking cane.
As a practitioner of Tang Soo Do I'd seen a Master's cane form and my own Master told me how he upon flying to an international seminar was obliged to check all weapons into the hold but was let onto the aircraft with his cane...! Mark Shuey, the founder of Canemasters, unsurprisingly holds a Tang Soo Do black belt as well as in Hapkido too where he first saw the cane being used in self defence.
Canemasters take this idea to the next level and have developed an entire self defence system. Certainly the added leverage goes a long way when using the cane and getting whacked by a cane which can be whipped round at a fair lick would really smart. I did have a slight problem and this was that these guys happily carried the cane around with them as a side arm and not as an aid to walking. "It's got me out of trouble a couple of times", said the seminar leader.
Hmmm. Maybe I'll take my tonfa out into town next week and see what happens...
Here is a rather limp version of the Tang Soo Do Ji pan gi hyung:
Posted by Littlefair at 12:31

I love the cane, and have a couple. I used them when I had injuries or surgery, and I may use one full-time when I'm a really,really old Dojo Rat. My Korean Master Tae Hong Choi loved the cane I had brought to class 25 years ago. In fact, he liked it so much he asked if he could have it. What could I say; it was an honor to give it to him and he showed me lots of nice techniques. The ones I have now are of strong white oak.
-John