Somewhere I've often thought would be a great day out would be the Royal Armouries, Leeds and as I was passing the other day I took the opportunity to stop. I did have the kids in tow so I took a bit of a punt but the upshot was a day we all enjoyed! 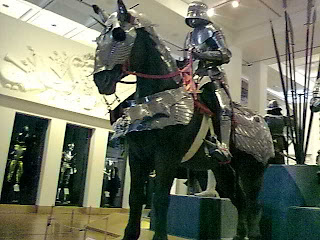 Of course I didn't get see half of what I wanted to as I really was 'on duty' but as this place covers 4 floors with two main sections per floor I think I'll be visiting again for a full day without kids! Having said that I feared that the museum was going to be an 'experience' and more directed towards kids entertainment with too many interactive features for the younger visitor. Not at all I found: there was a good mix of 'grown-up' pieces as well as talks by 'storytellers' about armour and archers and on the day we visited there was a joust! Amazing: The Royal Armouries has an outside arena for horse mounted japes such as this St George's celebration joust. It was a great bit of theatre and fun entertainment but impressive to see these guys in full armour displaying horse and fighting skills. 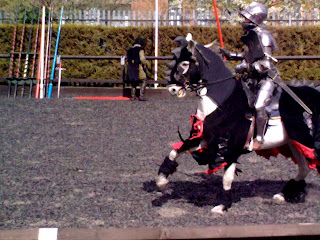 Jousting was a popular accompaniment to medieval tournaments which helped Knights hone their martial skills. I suppose like modern martial arts competitions and tournaments it was a good way to pressure-test technique. Although I find competing quite a scary experience it helps you look deeply at your technique in the run up to the event and also exposes you to nerves and adrenaline during the competition. Learnign to deal with nerves is an important aspect to martial arts and a good tool for life.
Having said that the jousting, for me, seemed sedate but was fascinating to watch and I can't wait for my next visit to the Royal Armouries! (No, I'm not being sponsored by them!)
Posted by Littlefair at 05:32

That is a very cool attraction! Here in Pennsylvania we have a Renaissance Faire and I have been fortunate enough to catch a couple of jousts there.

Leeds Royal Armouries is an outstanding place to visit, I've been a couple of times and still have not covered everything that have on show.

They hold some outstanding exhibitions including a few years ago a major display of some Japanese samurai weapons including loads of swords and a demonstration of Iaido.

Thanks for commenting fellas.

Hi Rig,
I just didn't have time to go to the Japanese floor (I was desperate to get there!) but I managed to buy some books in the book shop...

We were at the Royal Armouries last week as well! We went last Thursday. We missed the joust but saw some sword fighting demonstrations - one in full armour. It's a great place, pity you didn't get up to the Oriental floor - they have some amazing original samurai armour and horse armour. Then there's a whole wall of naginatas and loads of japanese archery stuff (you're into that arn't you?). About 3 years ago they had a japanese exhibition featuring the life of Ieyesu Tokugowa. They had loads of japanese stuff and did lots of martial arts demos and japanese sword fighting. It's definately a place I'll be visiting again. I was also planning to blog about it - hope you don't mind?

Oh yeah you've really got me worked up now for another visit! The kids are too young to let loose in a place with a load of pointy bits and shiny things! Think I'll plan a visit on my own or with some grown up pals..

Look forward to your blog about it! I'll link over to it when you've done it. Please upload your photos of it...:-)