Encouragement for beginners to sparring 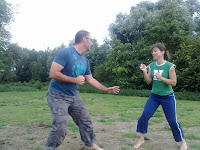 I offered some pre-tournament sparring practice to a friend who gladly accepted. Off we went to the country park...
As we searched for a suitable clearing to kick off our shoes I asked her what her 'problem' was (so I could focus on this in the following 45 minutes) and she replied that she found it difficult to score a point. She was a bit flustered by the plethora of techniques she knows and felt unable to bring them into play during sparring.
OK-let's bring up her confidence by concentrating on a few essential sparring techniques, after all much free-fighting is made up of front kick, round kick and a variety of straight punches. Of course we aspire to be able to use all our techniques in order to score the point but invariably we rely on a stock of well serving base techniques and sometimes the simpler, the better.
So with a minimum of time we set about improving her confidence (she'd only sparred twice in class before!) and this is how we did it:
Round 1: Just front kicks from her. I would encourage her to connect with the attack and I would counter at competition speed with anything I fancied but she must use only front kick.
Round 2: Same deal for me, but front and round kick for her.
Round 3: Front kick, round kick and punches.
Last round: Focus on these three but feed in any 'fancier' technique if she felt that there was a scoring opportunity availing itself. (In the end she only really added in back kick and possibly side kick).
I also emphasized kihaping.
How did it go? She's a natural. She didn't need my help she just needed confidence. It's easy to forget that when we started out in a particular style there is a bewildering amount of techniques that we are exposed to directly in our syllabus or indirectly in group classes and often this is just too much information and we cloud up. "Oh yeah but I can do this, no wait....Er, what about this technique...."
No. Stop. The object of competition sparring is to get the point. To score within whichever framework of rules exist. In order to score you have to react to the attacks of the opponent as well as look for opportunity to counter or initiate. My advice today was to use a core set of techniques (as the student is a relative beginner) in order to score points. Keep it fairly simple.
What I didn't do was go easy on her. My attacks were speedy and of varying heights: I wanted to get her flinching, checking out her blocking reactions, which were great! 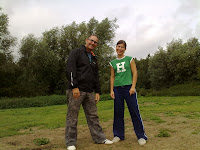 Photos courtesy of my little girl...
Posted by Littlefair at 11:54

Nice. This technique of restricting the possibilities works well across styles too.

For example, in stand-up judo randori we sometimes restrict one party to leg throws, the other to hip throws, for example, or practice a small set of throws in a kata-like way, and then only allow that small set in randori.

It was also great to read how you worked with her to build her confidence and uncover existing ability. Bravo!