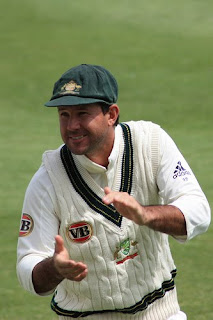 It's always great to beat the Aussies. Why? Well we're old rivals, it's clear to see, but also it's cos they're such bloody good athletes. As I type this on a sunny summer afternoon England are on the verge of winning the Ashes from them. It's not over and there is a *slim* possibility that they could see today out and bat all day tomorrow. But it's so slim that I wouldn't want to make a ham sandwich of that slice of slim-ness.

The amazing thing is though that the Aussies never give in. They have an amazing resilience in the face of adversity which has stood them in good stead in the past. At the opening of play today they were 80 for no wicket and the openers looked mighty comfortable. Even when they were sent from the field of play Ponting looked really in command. If it wasn't for an amazing run out Ponting, one of the best batsmen in the world and certainly a great captain, he may well have steadied the ship. The commentators never cease to say that the Aussies have the "stomach for a fight", "never say die" and this has been clear today with an incredibly solid fight back. They'll be kicking themselves over their first innings collapse of 160, something which has been attributed to English teams in the past.

If you're going to pick a fight with an Australian then make sure you know you're in for the long run.

Post match interview with Ponting. Note his tempered response regarding his runout.