Organic food 'has no health benefits'

"Organic food is no healthier than ordinary food, a large independent review has concluded."
"Our review indicates that there is currently no evidence to support the selection of organically over conventionally produced foods on the basis of nutritional superiority."
""Although the researchers say that the differences between organic and non-organic food are not 'important', due to the relatively few studies, they report in their analysis that there are higher levels of beneficial nutrients in organic compared to non-organic foods."
As clear as organic mud pie.
Posted by Littlefair at 15:50 1 comment: 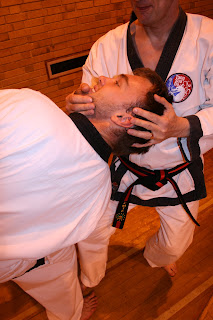 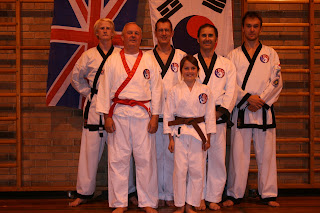 Posted by Littlefair at 03:45 No comments:

Guinness is good for you-official!

HURRAH!
"The old advertising slogan "Guinness is Good for You" may be true after all, according to researchers."
http://news.bbc.co.uk/1/hi/health/3266819.stm
Posted by Littlefair at 00:38 4 comments: 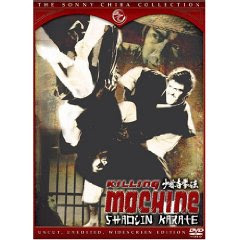 I've even had some people say to me that the reason they started practicing martial arts was because of the Bruce Lee films they saw! Dutifully I've tried. I really have but the best I can say about them is that they're crap. None of the fancy choreography or fight sequences do anything for me.

Sadly the latest film I watched called 'Killing Machine' (1976) didn't really change my mind either. It's fairly rough and ready and quite badly put together and cliche is piled upon cliche so I hardly warmed to it. There is, however, quite an interesting story underpinning the whole film, that this is the (unofficial) biography of Shorinji Kempo. So for me to say the fight sequences are lame might put me on thin ice. There's plenty for kenshi to enjoy in the film but you'd think that the only technique in Shorinji Kempo was gyaku gote!

The actors are quite obviously trained kenshi and this raises the film somewhat but it can't mask the true nature of this film and that is as a corporate video. OK so it's the way they might do corporate videos in 1976! The film shows the development of Shorinji Kempo after the war and the hot-headed Doshin So's efforts to create a dojo for the betterment of the common people. These are fine fundamentals and they still remain at the heart of kempo. As such the film does have a certain inherent value but I'd say only for the die hard Kenshi or maybe martial arts film geek. Sonny Chiba is 'good' in the film.

Bit cheesy, good kempo moves from Chiba, interesting as a training/research 'aid' or insight.
Posted by Littlefair at 14:57 2 comments:

Iced coffees 'a meal in a drink'

"Some iced coffees being sold on the high street contain as many calories as a hot dinner, a cancer charity warns."
Another nutrition/dietary article from the BBC website.
http://news.bbc.co.uk/1/hi/health/8168142.stm
(and just in case you were sitting there feeling smug while tucking into some 'healthy' dark chocolate...think again:
http://news.bbc.co.uk/1/hi/health/7159051.stm)
Posted by Littlefair at 01:37 3 comments:

I seem to be having a stressed couple of weeks. Modern life sometimes goes at a billion miles an hour. But we have to find a way to get on, carry on and push through the mist. 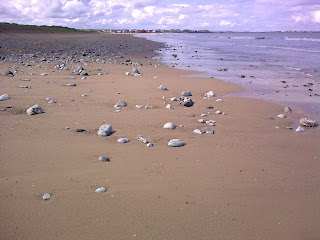 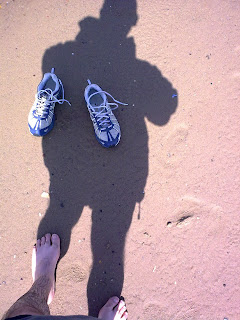 Part of this process involved a long barefoot run along the beach. 5 miles of firm sand and a salty bite to the air. It was sunny but I kept my running jacket on as the wind was chilly.
View Long Seaton Carew run in a larger map
Posted by Littlefair at 01:21 No comments:

or...
Are lentils the perfect food?
This article outlines one journalist's love of lentils and the wonderful benefits they can bring to our well being. Professor Jeya Henry explains why the British tend not to eat lentils, mostly because post war food production was geared towards meat but also adds because, "The British do not like to fart". That's a matter of opinion.
And in an attempt to balance this healthy article, you should check out the heart attack grill. Beware, as their website states, "None of the women pictured on our website actually have any medical training, nor do they attempt to provide any real medical services". 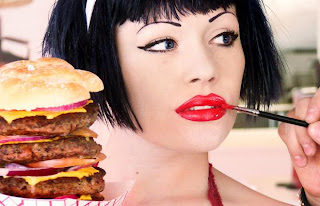 Posted by Littlefair at 05:59 No comments:

So you think you have a strong punch? 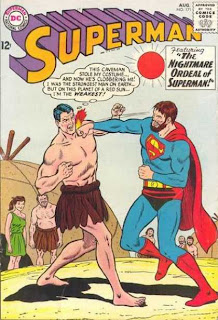 A man has been ordered to pay 1,950 euro to the owner of an amusement arcade for striking a punch-bag after it swung back and hit him on the jaw.
http://news.bbc.co.uk/1/hi/northern_ireland/8144233.stm
http://www.independent.ie/national-news/man-fined-for-punching-a-punch-bag-1815656.html
Posted by Littlefair at 04:15 3 comments: 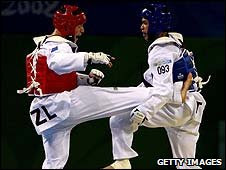 How far would you go to raise money to fulfil your dreams? Logan Campbell, a New Zealand Tae Kwon do hopeful was sick of tapping up his parents for money to fund his Tae Kwon Do training so he started his own business. He's opened a 14 room 'gentlemen's club'!
He's hoping to raise $NZ300,000 to help towards his Olympic dream but the selectors may well take a dim view on the way the money was raised.
Logan says, "I'm an owner of an escort agency [not a pimp]."
Semantics?
http://news.bbc.co.uk/1/hi/world/asia-pacific/8146782.stm
Posted by Littlefair at 10:46 No comments:

The unofficial motto of the British and of the martial artist everywhere: 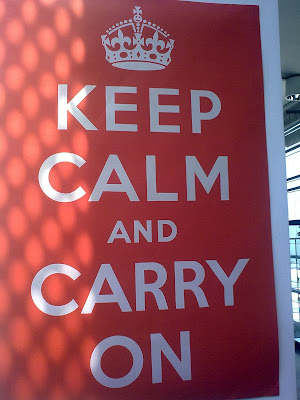 (Note use of King's crown)
As seen in the shop at Imperial War Museum, Duxford.
In case you're wondering the official motto of the United Kingdom of Great Britain and Northern Ireland is: 'Dieu et mon droit'.
Go figure.
Posted by Littlefair at 02:14 No comments: 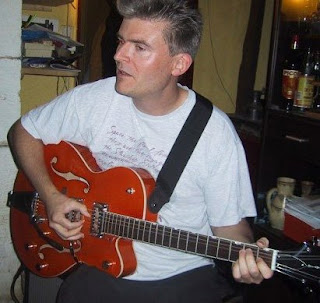 Dave Russell
08 July at 08:11----
Hey up Chris,
I'm trying hard to learn a piece of country guitar at the moment which comes off a tuitional DVD, which involves copying what the guy does note for note and I was struck by a parallel with martial arts. Naturally, I want to know what you think.
All the note for note stuff that we learn, like I'm doing currently, or like learning a solo, or intro exactly is like the choreographed floor routines that you have to learn in martial arts (I wish I could remember the proper word, but you know what I mean).
This then gives you ideas and armoury to engage in improvisation, which is like sparring, or combat.
What think?
Christopher Littlefair
08 July at 17:07 ----

Oh, Oh! Nice one! I think I'll be able to expand a blog entry I did about this once. And yours is a slightly different take on it.
Here's my article:http://diaryofamartialartist.blogspot.com/2009/02/rhythm-in-hyungs-kata.html
I think it is very similar, if not exactly the same sort of learning process. We drill a lot on individual techniques, then build them up into sequences (especially in forms and kata) then take it further into free fighting which is, as you say, a direct parallel with music learning. Equally each of these exercises are valid in their own right. It's perfectly reasonable to perform kata on their own just as it is to free fight. On the guitar you might happily play a known song which you have to follow: that is to say a pre-determined sequence like kata, or you might want to improvise/create new songs, like free fighting creates 'new' forms of expressing oneself in combat.
Neat comparison Mr Russell!
More music entries.
Posted by Littlefair at 08:58 No comments:

Marcus Aurelius was emporer of Rome from 161 AD until his death in 180. Towards the end of his life he studied Stoic philosophy which emphasised the control of human emotions and wrote many of his reflections down in the 'Meditations' during his stay in the Danube region.
"Do away with all fancies. Cease to be passion's puppet. Limit time to the present. Learn to recognise every experience for what it is, whether ut be your own or another's. Divide and classify the objects of sense into cause and matter. Meditate upon your last hour. Leave your neighbour's wrong doing to rest with him who initiated it."
"Put from you the belief that "I have been wronged", and with it will go the feeling. Reject your sense of injury, and the injury itself disappears."
Posted by Littlefair at 14:27 No comments:

Lessons from the air

Leafing through 'Go Flying!' (don't ask) I came upon an interesting article by aerobatic pilot Corinne Dennis who speaks about her nerves in the face of speed, danger and possible death.
She outlines in the article that she would be sick with nerves a week before an event. It wasn't the performance which bothered her but being unsure of her abilities to land the aeroplane! She has mastered her self doubt over the years through mental preparation and visualisation. Dennis flipped those nervous, negative thoughts into positive mental scenarios of "calm, unhurried ... preparations".
"Keep in mind a picture of yourself finishing the job".
From someone who works under intense pressure in an environment where mistakes could cost her her life these are indeed wise words.
Ref. Go Flying! July/August 2009.
Issue 15.
Posted by Littlefair at 13:02 No comments:

Ok, so technically, Yoko Noge isn't a warrior woman in the sense of a fighting woman but man, what a life! I listened to her amazing life story on this radio documentary: http://www.bbc.co.uk/programmes/b00b4mhx
This Japanese woman moved to Chicago to follow her passion: blues music. Upon arrival she was asked to sing in a club and has been ever since. Initially she and her husband fought poverty but kept their spirit with their music and their relationships which they forged in the poor neighbourhood where they lived. "It's been always poor but you see always toughness in human beings".
She says of that time, "it gives me the feeling back of a time when I really wasn't sure of myself and wasn't sure of anything but this interest to the music". Her slight Japanese accent stuttering only over int-ter-est only endears you more to her.
Indomitable spirit, passion and drive.
Posted by Littlefair at 03:10 No comments:

"Drinking five cups of coffee a day could reverse memory problems seen in Alzheimer's disease, US scientists say."
I blame the US scientists!
http://news.bbc.co.uk/1/hi/health/8132122.stm
Posted by Littlefair at 02:46 4 comments: