I've taught children as part of regular Tang Soo Do practice for about ten years. As with lots of other martial arts, higher grades are expected to take small groups of lower grades to instruct them on syllabus as part of the class. This is done under the auspices of the presiding black belt who will instruct on which aspect of the syllabus should be covered. This way the students can work towards their next grading, filling in gaps where necessary.
Since November 2009 I've been helping out Master AC with the children's class: something I really enjoy. I take the entire class of juniors (including some dads) for an hour before the senior class starts. This means I can focus on giving the children appropriate instruction tailored to little minds and bodies. The age range varies greatly, which makes the job difficult, but half way through I regularly get help from adult black belts who arrive early for their class and who are willing to help out.
What I like to do is use half an hour of warm ups and games and exercises to convey some principles of the art. The kids like this as they don't think they're learning as such but do exercise broad principles such as balance, body awareness, spatial appreciation, striking in a particular way with correct posture and energy direction. At half time I use the idea from Shorinji Kempo where we sit and I'll chat to them about philosophy in very broad terms. It also gives them a chance to drink (I oblige them to bring a bottle of water with them). this 'philosophy' moment is also ideal for talking about physiology, why we are training and guiding them in ideas about martial arts generally. It might sometime involve a 'classic' martial arts story.
The second half is more technical and focuses on combinations, partner work and hyung. It's here I need the help of other black belts so I can split the class into age groups.
Recently, though, I found I have a problem. Master AC assessed the class for the next grading and found they most of them didn't know their syllabus well enough. It seems I'm good at imparting general principles and keeping the children excited and interested in Tang Soo Do but not so good at drilling them on syllabus. I've over focused on giving them what I think of as a good martial arts experience without training them in the more technical aspects which I thought would be more boring for them.
So this is my new challenge! Trying to maintain a more traditional syllabus and keeping the children involved and interested. Everything we need to learn can be found in hyung (kata) so I need to look here again and start breaking it down for them. That's how karate was originally passed on and there are so many interesting applications within the hyungs that I'm sure I'll find a way.
I have the summer to think about it and turn a failure into a success...
Sue's article on teaching children:
http://kickasssuec.blogspot.com/2010/07/teaching-karate-to-young-children.html
Posted by Littlefair at 01:30 No comments:

This 5 mile run cleared my head and helped my knotted shoulders relax.
Extremely enjoyable with flora and fauna bouncing around like a Disney film. 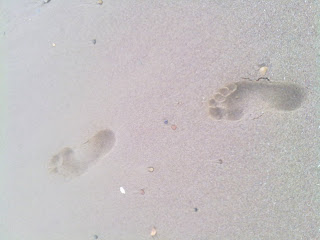 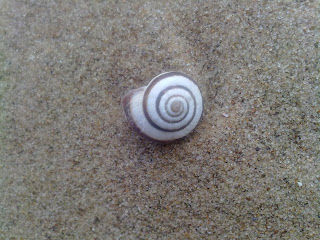 This little fella was smaller than my little finger nail. 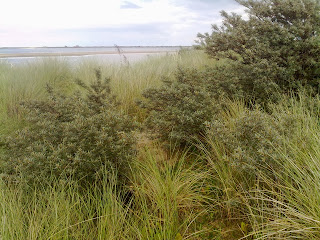 Shame about the power station.... 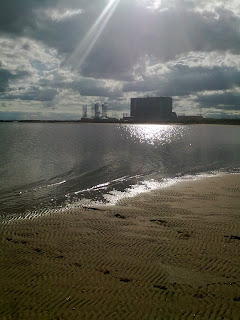 View Blue Lagoon run in a larger map
Posted by Littlefair at 14:11 2 comments:

I took a good solid kick in the lower abdomen tonight so I'm glad that I consider the box or groin guard as an essential part of my kit. Don't enter a dojo without one.
Having said that I suppose some arts which are based less on striking or kicking might just recommend using an elastic support without the hard plastic cup as this might nip a little.
Shorinji kempo is both hard and soft style so hitting and kicking is pre-requisite so I really need the cup.
I've always worn knee pads too (volley ball ones are more than adequate) and lately have taken to wearing small ones for my elbows too).
I prefer the comfort to the body 'conditioning' approach...
Am I getting old?
Posted by Littlefair at 15:18 5 comments:

Reduce your chances of developing dementia by 20% by making some lifestyle changes:
Apparently there is no proof brain training will help so much....
http://news.bbc.co.uk/1/hi/health/8484868.stm
Posted by Littlefair at 07:52 No comments:

Sadly I don't practice bokken *every* day but rather this is bokken practice in an every day context, that is to say my garden. With the cat mooching around my feet. 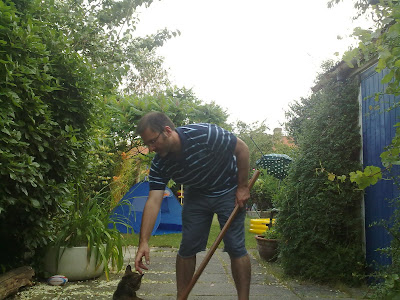 No animals were hurt in the making of this picture.
I mostly executed some suburi practice focusing on ki ken tai (don't we always!?)
Fun, hot and relaxing.
Posted by Littlefair at 03:33 1 comment:

With the demise of my dogi I have to start wearing a very good quality BJJ gi I bought. It's comfy and as someone pointed out looks like a dressing gown (owing to the extra padding that BJJ practitioners need for gripping the collar and the gi itself). The only drawback is that it's heavy and makes you warm!
So, advice on heat stroke and heat exhaustion below.
"The Mayo Clinic says that heatstroke is the most severe of the heat-related problems. Like heat exhaustion, it often results from exercise or heavy work in hot environments combined with inadequate fluid intake. Children, older adults, obese people, and people who do not sweat properly are at high risk of heatstroke. Other factors that increase the risk of heat stroke include dehydration, alcohol use, cardiovascular disease and certain medications. Heatstroke is life threatening because the body loses its ability to deal with heat stress...it can't sweat or control the body's temperature. Symptoms of heatstroke include rapid heartbeat, rapid and shallow breathing, elevated or lowered blood pressure, lack of sweating, irritability, confusion or unconsciousness, feeling dizzy or lightheaded, headache, nausea, and/or fainting."
http://www.mayoclinic.com/health/first-aid-heatstroke/FA00019
Posted by Littlefair at 02:06 2 comments: