Gain a degree in judo!

OK, so you're a martial arts enthusiast but all that's on offer at University are boring subjects like History or Astro-physics or Business studies. How you wish there was a degree in martial arts...
Dream no longer! Anglia Ruskin University is now offering a degree in judo accredited by the European Judo Union (EJU). But before you pack your gi clutching a single ticket to Cambridge you should know that Bob Challis, course leader, says that this degree will be open to only world class coaches, he says "We’ll have around 30 to 40 judo coaches from around the world here at Anglia Ruskin University. The degree will require coaches of the highest level."
Ho hum.
Well done PMY for finding this article.
Posted by Littlefair at 08:35 4 comments:

In response to Cat's amazing post on dance and martial arts; movement and contact improvisation I'd like to share a video:
It's slow motion kendo illustrating how two bodies can interact with timing and power in relation to an opponent's body movement (intended and actual).
The music is beautiful but not the main feature I was 'struck' with here. Even though these men (this is the men's final) are a metre or more apart they feel each other's energy and movement impeccably. Check out Koiso's 'men' strike against Inage: like a wave rising up, feeling Inage not taking the bait and continuing on to 'men'.
Uchimura's kote on Teramoto is also sublime. Here he feels the air with his shinai, tempting Teramoto to raise which he does for a men strike. Uchimura then closes distance fast for kote.
I was taught in both kendo and Western Fencing to touch blades with your opponent in order to feel the energy, or indeed to fool your adversary into striking or parrying in a particular way. These guys seem to have extended that out and are doing a similar thing without even touching blades. They're simply using the air around the blades! This interaction is much more subtle than sticky hands but I think just as relevant as a form of 'contact improvisation' where two energies interact and work around each other.
Posted by Littlefair at 15:26 No comments:

Well, the commentator certainly found this kick "impresionante" but what I found interesting was that the guy was falling over and still had the presence of mind (or was it just an intense, drilled, fighting mind) to kick as he went down...
Incredibly shabby handwork! These guys were within hand striking distance but didn't even look like they'd be prepared to swat a passing fly, let alone hit each other with their hands. They didn't seem to block with their arms either. It has to be said though that I have trained with the University Tae Kwon Do squad and those guys are really sharp with their legs: rapid and strong so *if* you can get past their legs and through their leg guard you can be effective, if not you get thumped on the way in.
But you know what, I'm not going to churn out all the old chestnuts about Tae Kwon Do because it seems that many other martial artists look down upon it anyway, so I don't need to.
Surely though, all 'games' (or disciplines if you prefer) have rules? You wouldn't pick the ball up in football would you?
More on Aaron Cook, British Tae Kwon Do Olympic 2012 hopeful, here:
http://news.bbc.co.uk/sport1/hi/taekwondo/8676257.stm
Posted by Littlefair at 14:39 5 comments:

http://news.bbc.co.uk/1/hi/health/8688104.stm
"Eating processed meat such as sausages increases the likelihood of heart disease, while red meat does not seem to be as harmful, a study suggests."
One person's solution (not very complicated idea, but nicely put):
Posted by Littlefair at 03:16 No comments:

Death of a pair of good friends

It had to come to this one day...
The soles were gone, the sides ripped and my feet finally felt flat and unsupported running in them. Goodbye faithful Karrimor trail shoes... Into the bin you go...
Sniff. 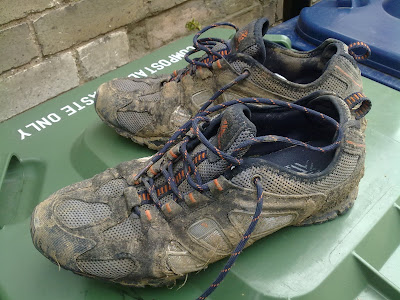 Just five minutes of exercise in a "green space" such as a park can boost mental health, researchers claim.
http://news.bbc.co.uk/1/hi/health/8654350.stm
Posted by Littlefair at 15:18 No comments:

I had never run 9 miles before so I was a little apprehensive. More so when I saw that there were only about 40 runners, most of which looked like pros...I was going to be at the back or even last so I had to accept it, relax and run. Before the run PP advised me to start at a slow pace, saving my energy and this helped immensely. It helped me also get into a steady rhythm.
92 minutes 23 seconds through wind and rainy conditions in beautiful undulating Cambridgeshire countryside...
View Larger Map
PP and I about to enjoy a breakfast roll, cuppa and muffin. The spoils of victory. 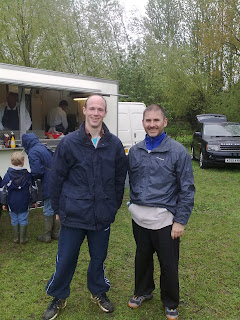 Posted by Littlefair at 05:23 No comments: 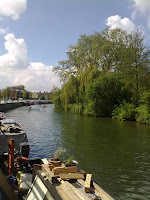 I had to stop and check out the boats as they clunk-whished past me on the river Cam. It was a nice settling noise which eased my nerves a little…
After having met up with the other grading candidates we chatted on the train to London and tried to remain focused. We each had our ways of handling the nerves but mostly we didn’t try and swot up, but simply relaxed. Jonathan’s cast iron concnetration was broken by a “silk” finish on a car he saw. From that moment on he couldn’t hink of anything else. I think he’s in love. 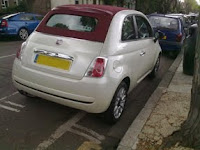 The grading went without hitch but during the warm-up I thought Iwas going to expire! This was when the nerves really kicked in. Luckily my grading started fairly soon and I didn’t have too much time to wait and think about gaps in my knowledge. As it happens the other two kenshi in my group seemed to have more gaps than I! At first this seemed like a blessing and boosted my confidence (even though I wanted them to do well too) but soon it became apparent that grading with others not so prepared can be a challenge in itself!
The grading flashed by with only a few hitches for me but we helped each other through and I felt good when it came to an end. The train journey home was full of relief and I wished we’d had a couple of beers… 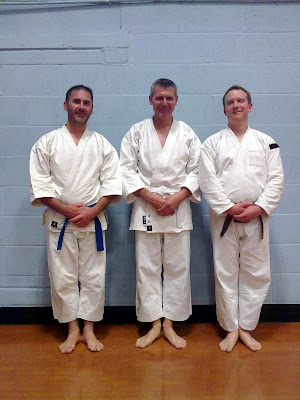 Posted by Littlefair at 04:58 No comments: