Cambridge fighter Tommy “Two Gunz” Maguire wears his soubriquet well as he shot down title holder Nigel Whitear at this Anger Management MMA Welterweight title fight in the first round.

There was much anticipation regarding this Mixed Martial Art fight and the local crowd in Kidderminster gave Maguire a hard time as he made his way into the packed hall. The atmosphere was electric as these fighters entered the cage and Maguire looked pensive as he focused hard to keep out the boos from the audience. As they lined up toe to toe we knew one way or another the fight would be explosive. Little did we know just how explosive.

Maguire, representing Tsunami Fight Gym, came out swiftly while Whitear seemed to be gauging the lie of the land, possibly planning his moves. Before he could do anything Maguire struck. Maguire pounded into Whitear rocking his opponent back onto his heels before rolling him over and onto the ground. Maguire, on top, faked an arm bar getting Whitear to respond one way but before he knew what had happened Maguire had flipped it and went for and succeeded with a Triangle choke, forcing Whitear to submit in a total of one minute and nine seconds.

Maguire, buzzing from adrenalin, took the belt still punching the air and Cambridge's Tsunami gym added another title to it's cabinet. Given Maguire's emphatic win he'll be relishing the next three defence fights for this title and the opportunity to use those 'Gunz'! 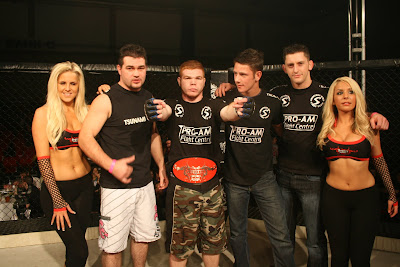