The Use of Weapons

After a few repeats of kesa giri I made it my learning point to look at losing the tension in my hands and arms. I needed to make the cut flow naturally and fluidly. I was minded that the fencing tutors told us to hold the foil handle like it were a small bird: too tight and we'd crush it, too lightly and it'd fly away. For the next ten or so repetitions of kesa giri I just concentrated on that and loosing my shoulders which led to some improvement but still not the lightness of touch I wanted or expected. The sword and I were two different processes and I was starting to experience a certain level of discomfort and unease. Relaxation of the grip and arms eluded me so I eased off, stood there and waited. It was cold but I took the time to breathe and waited for the draw to begin which it did. I drew and cut and re-sheathed in one (fairly) smooth line.
And then I waited.
Another draw with less tension- without focusing on the problem areas I was allowing the sword to follow its path more 'naturally' and inhibiting it less in it's flow. De-focusing or working on the core element of relaxation helped me connect better with the nature of the sword and of the cuts. 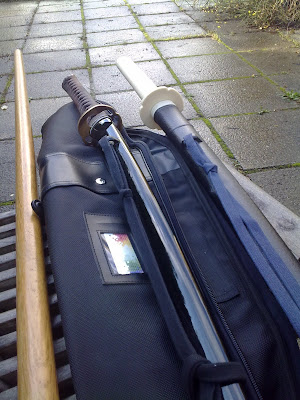 Following from this I took up the bo to continue training with this relaxed attitude which had worked just fine with the sword. I have a beautiful, traditional red oak bo staff which, while not being heavy as such, is substantial enough to lead to tight forearms after a while of training. I was looking for this lightness that I had found in the iai practice. It followed on nicely while executing simple low blocks, turns and strikes. Not grasping at the technique helped me flow and integrate better with the movement rather than fighting against it with my mind.
Posted by Littlefair at 10:08