He who hesitates is lost

Ok so I was going to make it (s)he who hesitates... but it sort of spoils the title bar...:-)
I find that London is never as busy as in Easter week. Kids are off school and there are thousands of French tourists. We added to the quota with our family and our French friends and we all bumbled around the sites enjoying the typically overcast-in-April day. When we arrived in Covent Garden we hit maximum crowdage. Couldn't move. Country bumpkin Littlefair, here,  didn't know where to turn. At one point I set off one way realised I was on a collision course with a commuter with a mean glint in her eye and thought twice about it so I did a bit of a jig, falling over myself and had to change course, twice in half a second. The hard-eyed commuter slightly changed her trajectory, readjusted and was off probably accustomed to this strange country dance that the bumpkins bring to the City.
Iai is about focus, as are many other martial arts. But especially iai. Focusing on your enemy and your strike is imperative. Sometimes you are aware of other attackers but you choose first and then  strike hard, with conviction and complete focus. Making this first cut your consuming aim is essential. If this first attacker isn't dealt with correctly and with all your attention then there won't be a chance to shift your focus to the second or the third. That's not to say you shouldn't have an all round awareness of the other attackers on the periphery but you must kill the first enemy with conviction. No dancing around or fumbling. No half committing to first attacker then half way in thinking maybe it's a mistake and dithering over the second attacker without having even finished the first. Bad idea. Strike forward with meaning, readjust strike out again.
Otherwise you might end up with a face full of commuter.
Blitz memorial at St Paul's Cathedral. 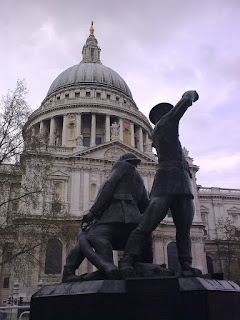 Excellent example of how martial arts training increases our awareness and focus in our daily lives. Gotta watch out for mean eyed commuters. :)

I am not familiar with iai. The more I read about different martial arts styles, the more similarities among them I find.