Was Elvis really any good at karate?

Really good artilce here: Was Elvis Presley a Paper Tiger? Did the King Get a Real Black Belt?
Thanks to John W Zimmer for pointing it out. 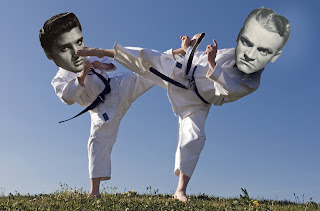 The above inspired by Dojorat and Dan Prager's comments...
Posted by Littlefair at 05:41

Well, ever since I saw that Elvis went to work for the Drug Enforcement Agency (and actually got a badge from Nixon) and started ratting out his fellow musicians (especially the Brits who he was jealous of)I have no use for Elvis.
While he was sniching on pot smokers, he was developing a horrible perscription drug habit.
--I kind of feel the same way about Chuck Norris, but for different reasons. Ane don't get me started on Steven Seagal (although he is indeed a good martial artist)!
Ha,ha -it was a good retrospect though! Thanks, -D.R.

I bet Cagney could have kicked Elvis' ass!
That was great Dan, Thanks!
John @ Dojo Rat

To your blogs gentlemen: Let us see if we can make this one take over the internet! ;-)

Image uploaded chaps- for your amusement
:-)

Nice image. I'm trying to get Cagney to beat Elvis in a GoogleFight, but it's proving tricky.

Here's the closest that I have managed so far.